A new brain training study has just been published, and as usual, the results are mixed. That hasn’t stopped it from being presented as a revolutionary finding; even the press release from the university where the research was conducted declares “Johns Hopkins Finds Training Exercise That Boosts Brain Power.” Other headlines read “Brain Training Exercise Vital for Improving Brain Power,” or “This One Exercise is All You Need to Boost Your Brain Power.”

Vital? All you need? Really?

The study, published in the brand new Journal of Cognitive Enhancement, had participants train on two tasks: a complex span task (a memory task similar to Spatial Span) and a dual n-back task (a popular brain training task that involves constantly updating a set of items in memory). They were then tested on related memory tasks, as well as a test of overall fluid intelligence. Brain activity in the prefrontal cortex was also recorded using EEG.

Complex span training didn’t have much of an effect on anything. Dual n-back training improved performance on related memory tests, and led to changes in EEG activity as well.

Changes in brain activity after a control task, complex span task, and dual n-back task. Note that only the dual n-back change was statistically significant. (Source)

Neither training task led to improvements in overall intelligence, however. If they did, it would be what is known as “far transfer” in the brain training literature—training on one task, then getting better at unrelated tasks. In this study, and so far in most of the scientific studies, far transfer has been elusive.

So, Does Brain Training Work?

As we’ve said before about similar results in the past (see related posts, below), this really confirms that brain training doesn’t work. The label “brain training” implies that there is some generalized effect on the brain—a boost in power, as the headlines proclaim—the same way that training a muscle will allow you to lift any object using that muscle. So far, brain training hasn’t been shown to have a comparable effect. It only makes you better at the task you just trained with, and closely-related tasks. That’s practice. It’s learning. It’s wonderful! But it’s not brain training.

The EEG results in the new study are intriguing, but right now it’s hard to say what they mean. Brain activity was changed by the n-back training. We knew that—if participants learned something, then their brains changed. That’s what learning is. But is altered EEG activity an indication that the brain has undergone some generalized increase in “power,” as the headlines claim? 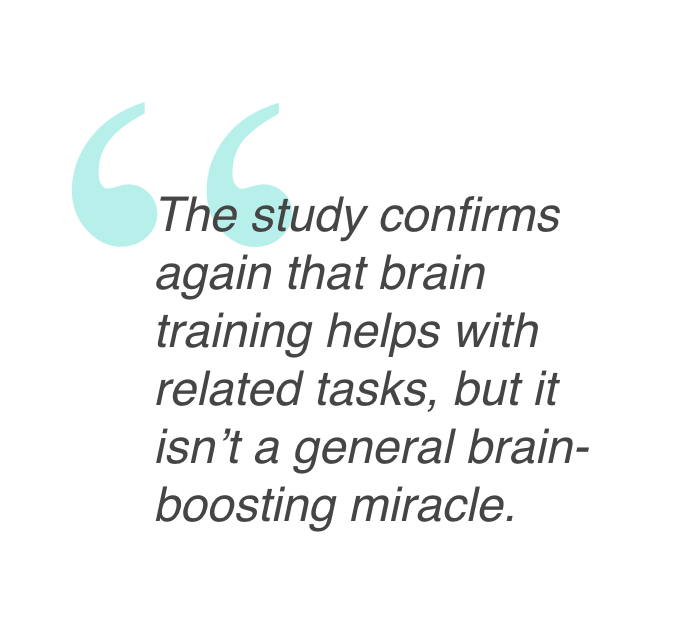 Other studies (e.g. Kundu et al., 2013) have argued that EEG data shows better connectivity in certain brain regions after training, which indicates brain improvements. That may turn out to be true, but all these studies show, so far, is that the brain is different—and that difference didn’t seem to translate into better behavioural performance. The data may hint at more than an arbitrary change due to learning, but it is premature to frame these new EEG results as evidence that brain training is beneficial in the real world

We end up where we usually do after studies like this: with a bit more confirmation of what we already knew, and a whole lot of unknowns. The study confirms again that brain training, in the form of a dual n-back memory task, helps with related memory tests, but it isn’t a general brain-power-boosting miracle. It also changes brain activity, which may help us figure out how the brain works. But we still don’t know exactly how brain changes translate into improvements in everyday life, or if there is any other task that could achieve far transfer and genuinely boost the brain.

These restrained conclusions make the bombastic headlines not only inaccurate, but misleading. One test had very limited effects compared to one other test. It’s not all you need. It’s not vital. It’s outright dangerous to suggest that the n-back should replace proven cognitive health interventions.

There are known steps that can increase cognitive performance and/or brain health, and they’re nothing new: sleep, stress, and exercise, for example, affect how sharp you are.

This post was written by Mike Battista, a staff scientist at Creyos (formerly Cambridge Brain Sciences).