What is the RPQ?

The RPQ is a self-report scale designed to measure symptoms associated with post-concussion syndrome (PCS). A concussion is a mild traumatic brain injury that can occur after a blow to the head or violent movement, often as a result of sports injuries or vehicle collisions. Symptoms can include headaches, dizziness, cognitive deficits, and more. The types of symptoms and their severity depend on multiple factors, such as the nature of the injury, age, sex, and the effectiveness of treatment or symptom management—that is why it is essential to measure symptoms over time using tools like the RPQ.

The RPQ asks patients to rate how much of a problem these symptoms have been in the past 24 hours, compared to before the injury occurred.

When the RPQ is administered in Creyos Health, responses are automatically scored, and a report is generated. Each item is rated on a 5-point scale, from 0 = not experienced at all to 4 = a severe problem, then tallied. Symptoms are divided into early symptoms (headache, dizziness, nausea and/or vomiting) and late symptoms, which can be scored and tracked separately in addition to the overall score. An overall score between 16 and 35 may be indicative of post-concussion syndrome, and greater than 35 may also be predictive of moderate to severe limitations in abilities. 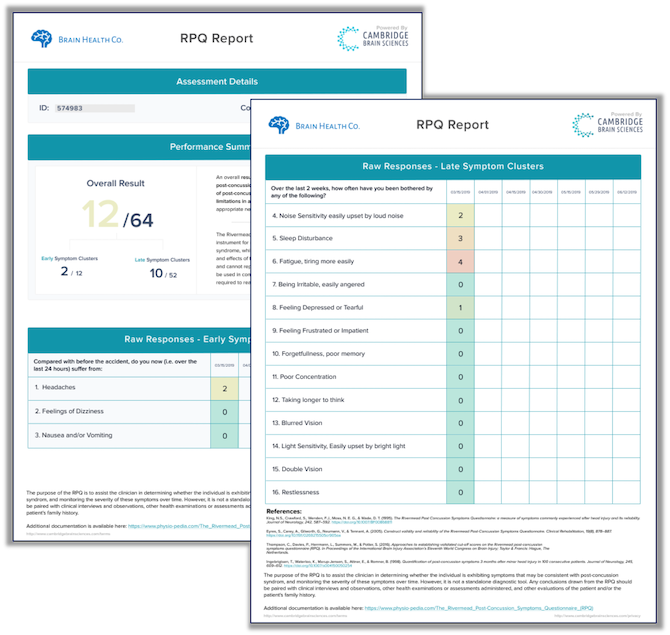 Note: The purpose of a RPQ is to assist the clinician in quantifying concussion symptoms and monitoring the severity of these symptoms over time. Any conclusions drawn from the RPQ should be paired with clinical interviews and observations, other mental health examinations or assessments administered, and evaluations of the patient’s level of distress, functional impairment, and/or patient history. Please refer to King et al., 1995, for additional details.

How is cognition affected by concussion?

Loss of concentration and memory issues are key symptoms of post-concussion syndrome, and other symptoms such as loss of sleep and fatigue may further exacerbate a patient’s ability to perform cognitively demanding tasks.

While it is clear that concussions affect cognition, the precise nature of the effects can vary by the regions of the brain affected, the time since the injury occurred, and patient characteristics such as baseline functioning, age, sex, and physical health. That is why measuring cognition and symptoms associated with concussion is so important when treating a unique individual patient.

On average, immediate effects of concussions can be detected in neuropsychological tests. One review (Belanger & Venderploeg, 2005) found that, within 24 hours of a sports-related concussion, memory and global cognitive functioning are significantly impaired. Other studies (e.g., Bleiberg et al., 2004) find that, in certain conditions, other cognitive domains, or an inability to learn quickly, are impaired in the days immediately following a concussion.

Most research finds that the cognitive symptoms of concussion fade within 3 to 7 days after the injury. However, there is variability in recovery time (see McCrea et al., 2003), perhaps due to variations in clinical management of symptoms. Furthermore, concussions may have subtle but detectable long-term effects. A study using Creyos Health tasks (Stafford et al., 2020) found identical difficulties with response inhibition (measured using our Double Trouble task) in both members of the general public who had a history of concussion and an independent sample of American football players.

Because cognition is a key outcome measure, many practitioners in the concussion management space will administer both the RPQ and objective neuropsychological tests in order to capture physical and subjective symptoms alongside cognitive performance measures.

How can a computerized RPQ be administered in Creyos Health?

By administering the RPQ within Creyos Health, you can gather data on self-reported symptoms alongside objective cognitive performance data, to get a complete picture of a patient’s post-concussion deficits and recovery.

The Creyos Health version of the RPQ has the advantages of being digital and automated. With a few clicks, you can start a single assessment, or send a series of assessments on a schedule by email as part of a telehealth program. Results are scored instantly, then scores and trends over time are automatically added to the patient’s reports. From a patient’s point of view, they simply follow the self-directed process, and in only a few minutes their healthcare provider receives valuable data on post-concussion symptoms to help guide and track concussion management.

Creyos Health includes objective cognitive testing alongside built-in questionnaires for assessing mental and physical health, such as the PHQ-9 for depression, GAD-7 for anxiety, ASRS for ADHD, and more. Finally, if there are any questionnaires you are using today as part of your practice that you would like to have available within Creyos Health—or if you have other feedback or comments for the Creyos team—please do not hesitate to let us know by commenting on this blog post or contacting us by email. We always look forward to hearing from you.