Bipolar disorder affects almost 1 in 20 people during their lifetimes, and over 80% of cases are considered serious—a higher percentage than any other mood disorder (Kessler et al., 2005). Despite its seriousness, bipolar disorder is often misdiagnosed as depression, especially on first presentation, suggesting a need for better and more frequent screening (Singh & Rajput, 2006).

The Mood Disorder Questionnaire (MDQ) was developed to address the need for a screening instrument for bipolar spectrum disorder. It is now included in Creyos Health to easily administer to any patient, on its own or alongside cognitive tasks and other questionnaires.

Note that clinical judgment should always be used when interpreting an individual’s MDQ scores. It is a screening instrument, not a diagnostic test. A trained clinician should follow up with patients who reach the cutoff score for bipolar disorder on the MDQ.

What is the MDQ?

Bipolar disorder is actually a spectrum of disorders characterized by cycling between two or more mood states, such as mania, hypomania, and depression. Because depression is a common symptom, bipolar is often misdiagnosed, despite requiring a different treatment path. Because of this need for earlier and more frequent identification of potential cases, Robert M. A. Hirschfeld and colleagues created the MDQ in 2000 based on the criteria for bipolar disorder identified in the fourth version of the Diagnostic and Statistical Manual of Mental Disorders (DSM-IV). 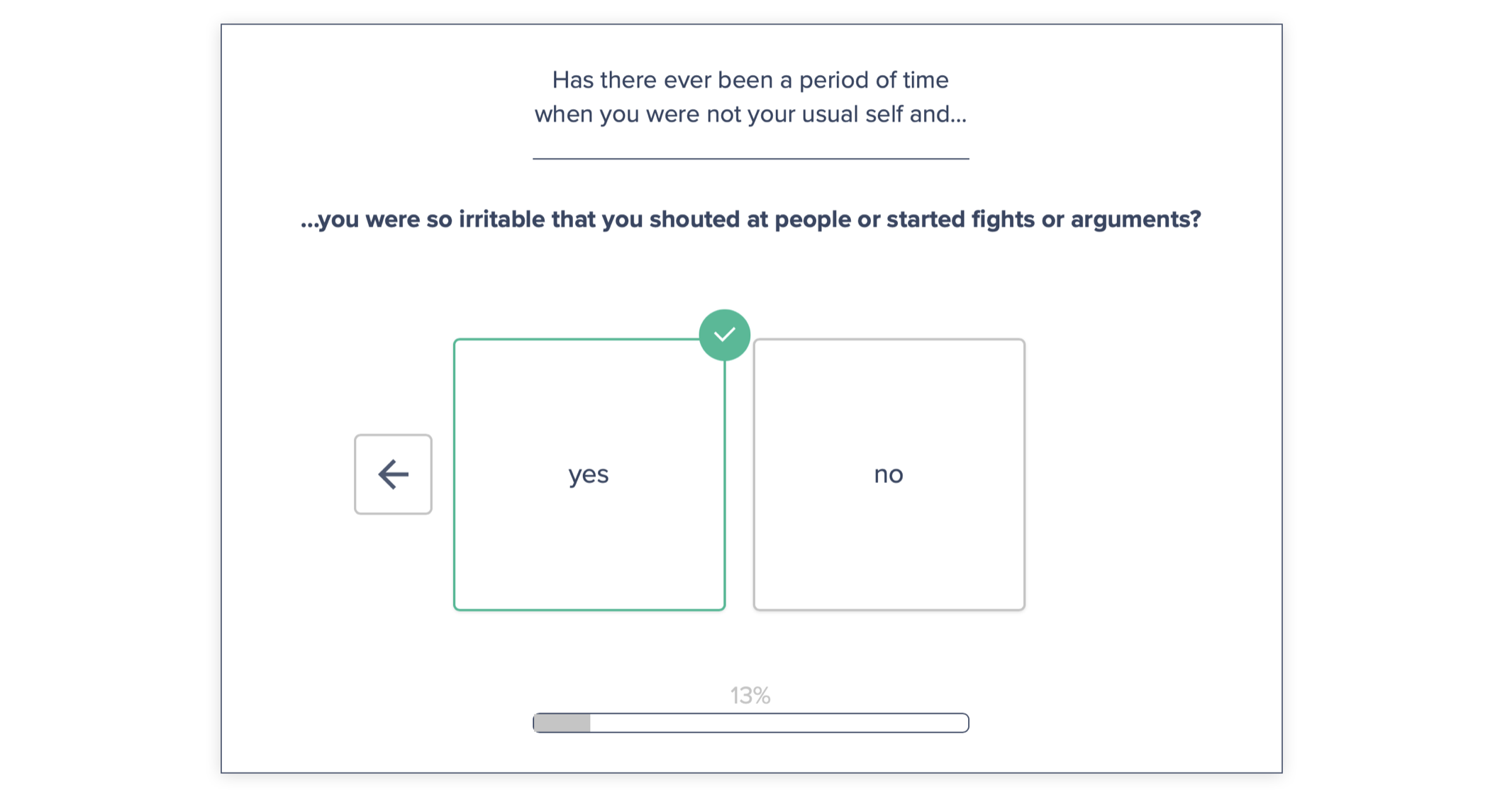 The MDQ is self-administered, and can be completed in about 5 minutes. It contains 13 yes/no items assessing a history of manic or hypomanic symptoms and behaviors, such as “thoughts raced through your head or you couldn’t slow your mind down.” Two additional questions about symptom co-occurrence (more than one symptom at the same time) and impaired functioning (symptoms causing real-world problems) are also included to measure the severity of the symptoms. A total score is calculated based on the 13 main items. 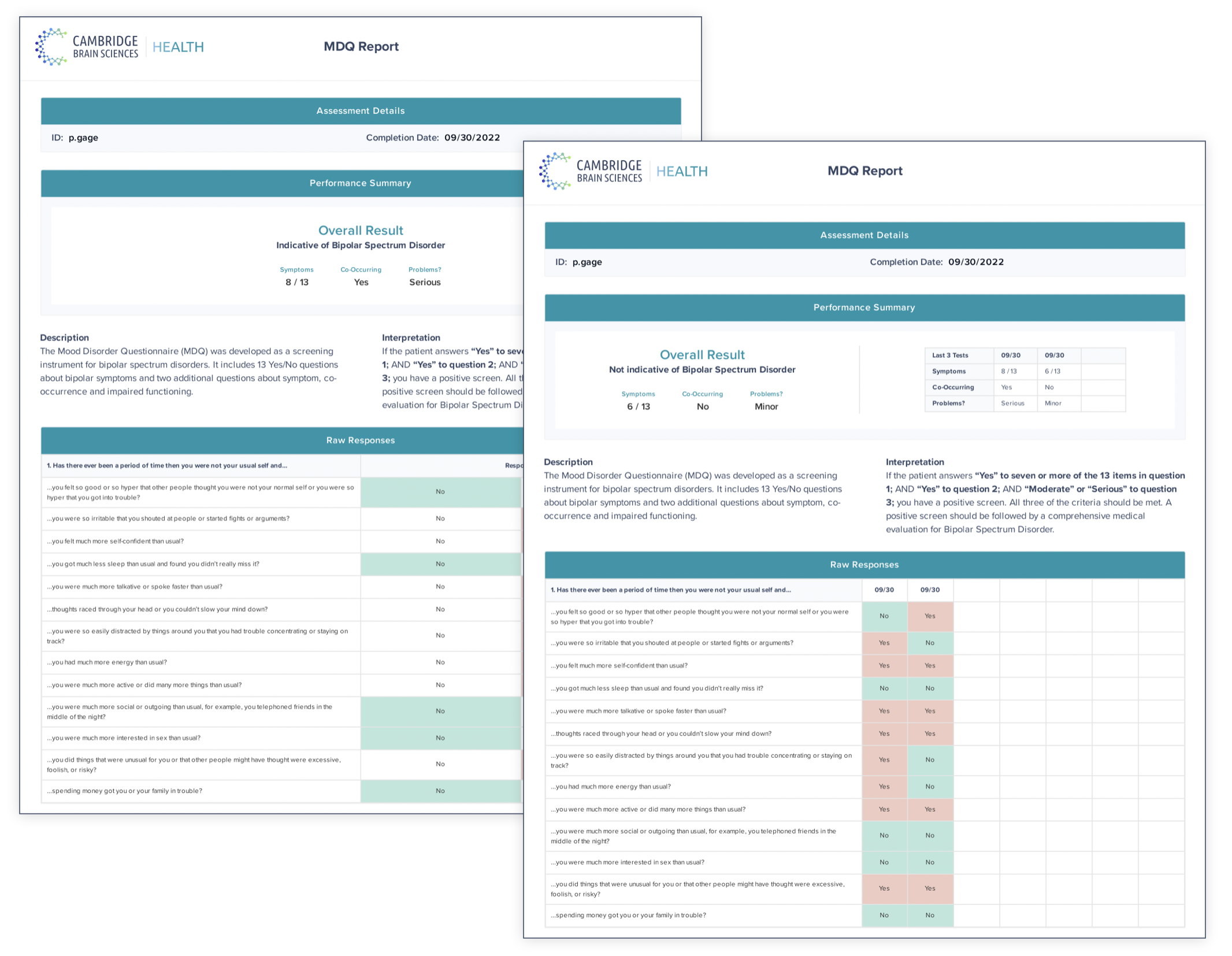 In its original validation study (Hirschfeld et al., 2000), a cutoff score of 7 provided good sensitivity and specificity for independent diagnosis of bipolar spectrum disorder (including bipolar I, bipolar II, and bipolar disorder not otherwise specified). Subsequent research has confirmed the accuracy of using the MDQ to screen for bipolar disorder (Wang et al., 2019). In Creyos Health, if a patient scores 7 or higher, answers “yes” to co-occurrence of multiple symptoms during the same time period, and “moderate” or “severe” to the problems caused by symptoms, then a positive screen is indicated, and the patient is recommended to continue with comprehensive evaluation for bipolar spectrum disorder.

How can healthcare providers make the most out of administering the MDQ to patients?

Patients with bipolar spectrum disorder can feel let down by the healthcare system. They often wait 10 years or more between a major mood episode and a diagnosis, and many patients are misdiagnosed at least once during that time. Delays and inappropriate treatments can lead to worsening of a patient’s condition, and may even put their life in jeopardy (Drancourt et al., 2013).

Systematic, early screening from a variety of healthcare providers can help meet the needs of patients with bipolar. Any clinician working in the mental health space should have a mood disorder screener like the MDQ available. Depression is particularly likely to be confused with bipolar disorder (Rybakowski et al., 2011), so more screening in patients being treated for major depressive disorder can help avoid the dangerous consequences of inappropriate treatments. The MDQ can be used alongside instruments like the PHQ-9 to get a more complete picture of a patient’s mental health, and the digital versions of these questionnaires available in Creyos Health ensure that screening tools can be administered without additional burden on a clinician’s limited time.

The MDQ does have some limitations to be aware of. Although the instrument’s sensitivity is quite good—about 80% across studies (Wang et al., 2019)—widespread use of the MDQ would still lead to a large number of false positives. Therefore, whenever the MDQ indicates possible bipolar symptoms, it is always recommended to follow up with a confirmatory diagnostic interview from a qualified expert (Carvalho et al., 2015). As with most self-report questionnaires, it is best used for screening, diagnostic aid, and tracking of symptoms rather than as a standalone diagnostic tool.

How is bipolar spectrum disorder related to cognition?

Because bipolar is cyclical in nature, the cognitive effects can be difficult to identify—brain fog is not constant, and in acute phases, patients are not good judges of their own cognitive abilities (Lin et al., 2019).

When measured objectively with cognition tasks like those included in Creyos Health, areas such as inhibitory control, attention, verbal memory, episodic memory, and planning tend to be impaired in bipolar patients, relative to a generally healthy control population. Cognitive impairment is especially apparent in acute phases, but appears to be a feature of people with bipolar disorder even during a neutral period without depression or any type of mania (euthymia) (Quraishi & Frangou, 2002; Glahn et al., 2007). More severe cognitive impairment is linked with more episodes, longer duration of illness, hospitalization, and worse clinical outcomes (Martinez-Aran et al., 2004; Cardoso et al., 2015).

These deep links between cognition and bipolar mean that it is crucial to consider intellectual function when treating the condition. Repeated testing can ensure that a snapshot of cognition is captured during different phases of the cycle, which may help predict clinical outcomes, as well as demonstrate progress as treatment progresses. Creyos Health includes cognitive assessments that can easily be administered multiple times, with automated scoring, reporting, and trend-tracking to examine objective cognitive results alongside the self-reported information from the MDQ. 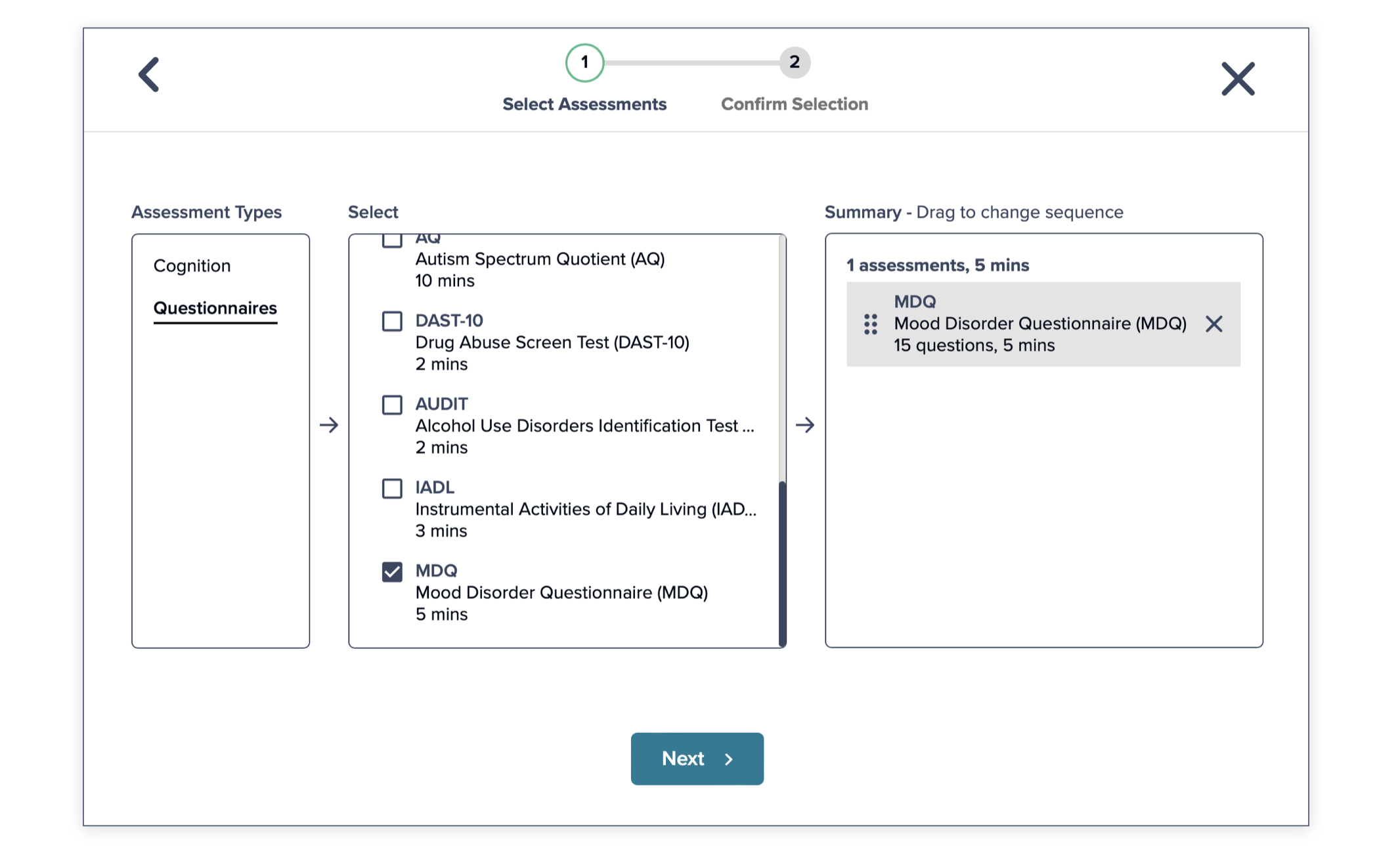 Results are automatically scored and presented in a report that provides guidance on whether or not further assessment for bipolar disorders is recommended. Routine screening or follow-up assessments can be automated by adding patients to a Creyos Health schedule—when sent by email, assessments can be completed on any device, with no login required.

Completing the MDQ in Creyos Health is streamlined for the patient as well. This web-based version of the questionnaire guides patients through the items, including the ability for patients to scroll up and review previous questions when asked about co-occurrence of symptoms during the same period of time and how much of a problem they caused. If completing the MDQ from home, the patient doesn’t even need to create any login—they can begin the questionnaire right from the link in their email.

Creyos Health includes many mental health screeners and patient questionnaires. If there are any other questionnaires you would like included in Creyos Health, such as those you are currently administering in pen-and-paper form, please do not hesitate to let us know by commenting on this blog post or contacting us directly by email. We are always happy to hear your feedback.

Thank you, as always,

— Mike, Staff Scientist at Creyos, and the Creyos team