Can eating affect your cognition? On one hand: obviously! All of us have felt sluggish after a big meal. On the other hand: there is a lot of pseudoscience surrounding diet and the brain. The widely accepted notion that turkey in particular makes you sluggish? Probably not true. As usual, the real science linking food to cognition is a complex recipe.

Food and supplements that claim to affect cognition are in the news a lot lately, but it’s not a new area of study. Let’s dig in to a classic paper (Rogers et al., 1999) that examined the effects of one ingredient in our diet: tryptophan. Tryptophan is an interesting amino acid, because we can only get it from our diets, and it is a precursor to the neurotransmitters serotonin and melatonin, so it is necessary for proper brain function.

Participants were either given a drink with plenty of tryptophan, or deprived of it. Then, they completed a computerized cognitive test, somewhat similar to the Token Search cognitive task from Creyos (formerly Cambridge Brain Sciences). They had to make a guess about where a token was located among several boxes, then bet points on the correctness of their guesses. The results were fascinating: 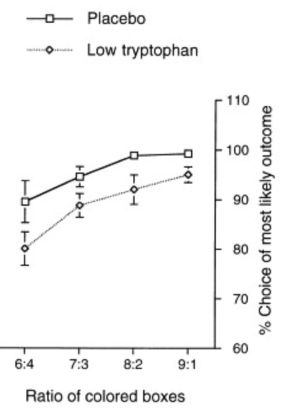 There are a few nuances here, but the main point is that higher choice of the likely outcome indicated more rational decisions, and thus better cognitive performance. Participants deprived of tryptophan—the bottom line—did worse on this outcome.

A lot of foods contain tryptophan. Fish, nuts, eggs, spinach, cheese, and bananas are all good sources. Apparently sea lion liver is the best source, but we don’t see that on most menus. Oh, and the turkey falsely accused of making you sluggish? High in tryptophan.

I said the science is complicated, and this is no exception. Other studies (e.g., Schmitt et al., 2000) have found that tryptophan depletion helps other aspects of cognitive performance, such as focused attention. Plus, ingesting amino acids from supplements in a lab can have different effects than getting it via actual food.

The science team here at Creyos talked about this over breakfast (including tryptophan-rich bananas, so you know it was a rational conversation). We noted that, if you search the literature, you can find that any food has any effect—and also the opposite effect.

The only way to resolve these apparent contradictions is to push forward with research. The study above shows that there are cognitive tests, like those from Creyos Research, that are validated and sensitive to interventions. They enable genuine discoveries about the links between lifestyle and mental fitness.

Let’s leave pseudoscience to the turkeys.